Westminster’s Services Division has been awarded a long-term (20+year) managed services contract to provide security services to 5 airports in the Democratic Republic of the Congo (“DRC”).

The contract, based on Westminster’s managed services model successfully deployed elsewhere in the world, enables governments and airport/port authorities upgrade their security operations and infrastructure to comply with international standards, at no cost to themselves. Under the contract Westminster will provide all the investment and expertise required to put in place the required equipment, infrastructure and systems to create world-class airport security services, opening up the potential for growth in air traffic by attracting new international carriers and commercial enterprises to the region. 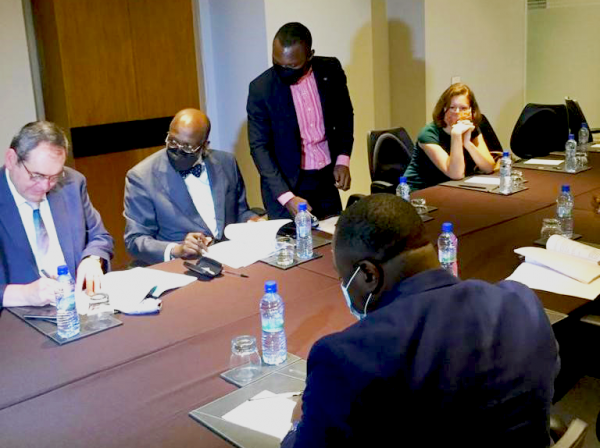 Mark Hughes, CFO of Westminster and some of the negotiating team at the signing ceremony witnessed by Her Majesty’s Ambassador to the Democratic Republic of the Congo, Ms Emily Maltman

Westminster will also operate and maintain the security operations for the duration of the contract continually upgrading the systems and services to ensure compliance with changing international regulations.

“We stated in our 2020 annual report, issued in May 2021, that delivering at least one more large-scale managed services contract this year, despite COVID challenges, was one of our priority goals. I am therefore delighted that our Services Division has secured this important new long-term managed services contract in the DRC, one of several such opportunities being pursued around the world, which further expands our airport security projects and international presence.

“I am also delighted that as a direct result of our strategic acquisition of our French business, Euro Ops, in 2019 that we are now developing opportunities, such as this, in Francophone Africa.

“The Democratic Republic of the Congo has been one of our target markets for some time and a country we believe has exciting growth potential. With a surface area equivalent to that of Western Europe it is, by area, the largest country in sub-Saharan Africa, the second largest in all of Africa, and the 11th-largest in the world. It is also the most-populous Francophone country in the world. Air travel is therefore an important and a necessary requirement within this vast country. The country is extremely rich in natural resources and has the potential for sizeable economic growth. I look forward to Westminster having a long-term presence in the country and in playing our part in the successful growth and security of the country’s numerous airports.”